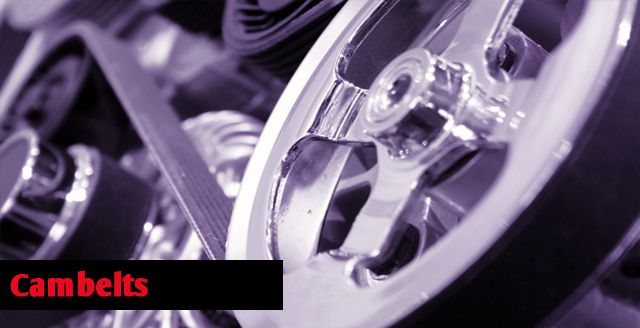 Your timing belt, also known as the cambelt, allows the engine crankshaft to turn the camshaft which controls the opening and closing of the engine’s valves. The valves open and close allowing fuel to enter, ignite, and exhaust, thus the valves are a primary part of controlling the flow of fuel and exhaust gasses through the engine.

The cambelt allows all this to happen and an engine cannot run without it. In some engines, the timing belt may also be used to drive other engine parts such as the water pump and oil pump. A snapped cambelt can result in engine head dismantling and valve replacement, with labour and materials often costing hundreds of pounds.

If your vehicle’s cambelt or associated timing components are damaged, it is likely that the engine’s timing is out and potentially there has been damage to the valves and associated components. If there is reasonable suspicion that this is the case, the engine head should be removed as a first course of action.

Cambelts are typically made from rubber and it is a common recommendation is that they are replaced every 3 years or 60,000 miles to avoid the belt breaking and causing serious engine damage. You can check this in your vehicle handbook.

Get our details on your phone in seconds! Just scan this code using a QR Code reader on your mobile device